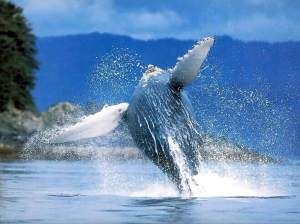 In a few days, the International Whaling Commission will gather in Agadir, Morocco to vote on a proposal that would legalize commercial whale hunting for the first time since 1986.

The global public is against this proposal, but pro-whaling countries are pushing for it hard.

If you want to help fight legalized whaling, please make sure your voice is heard.

Avaaz (meaning “voice” in several European, Middle Eastern and Asian languages) has a team on the ground in Agadir setting up billboards, publishing front-page newspaper ads, and building a giant, constantly-updating petition counter to represent the numbers of people across the world opposed to legalizing whale slaughter.  All of this to ensure that delegates, from the moment they step off the plane until they cast their votes, will see these explosive numbers.

There are over 900,000 signatures to date – Please help the number soar over 1 Million!